Well that's a wrap for this year's Frostbite Series and what a way to finish with 2 races in perfect breeze (at last...) and some of the prizes being decided right on the finish line of the last race! It doesn't get much better than that.

In Division 2 the battle went right to the very end of the last race with Macsen Barber taking 1st place from Sirene Le Petit by just 1 point in their RS Teras! Lukas Tyrrel in his Topper came back to take a convincing 3rd whilst still nursing bruised ribs from last week's race!

In division 1 Jon and Amelia Nuttall in their Laser 2000 really found the fast button in today's conditions with a 1st and 2nd place but it was Jake Scott, this series' Mr Consistent, with the same 1,2 score line today that took the series overall convincingly. The battle for 2nd was close, again going down to the last race of the series with Geoff Turner in his Supernova just getting the better of Rob Main by 1.5 points overall!

Massive thanks to all the sailors that came along to make this such a competitive and fun series and to all of the volunteer cabin crew, safety boat crew and beach crew without whom none of it would have been possible. Special mention too for Alex Sainter for hand crafting the awesome trophies and to Steffi at the The Alumchine restaurant, at Neyland Yacht Club for donating the prizes!

See you all at the Neyland Yacht Club opening meeting 25/26th April! 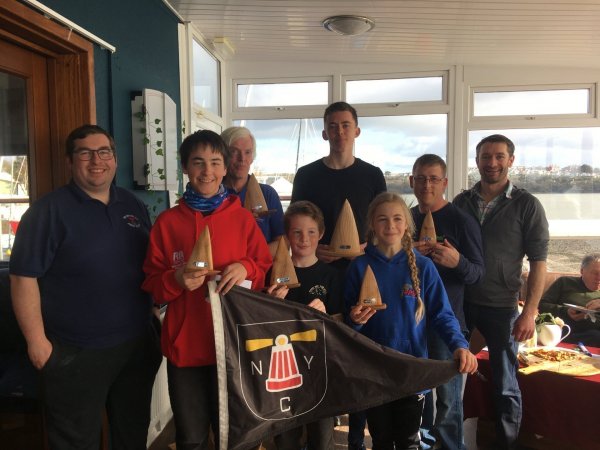